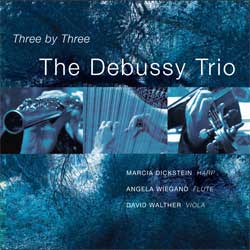 Loading tracks...
Update Required To play the media you will need to either update your browser to a recent version or update your Flash plugin.

In the blue glen begins meditatively,” writes David Evan Thomas, “with two melodic lines animated by the pulsing harp. The movement develops as a sonata with varied repeat and a full-throated climax. A scherzo allows the melody instruments a moment’s play before taking off downstream. The ‘trio’ begins, à la Haydn, as a rustic duo; in da capo, the various elements combine in superimposed meters. The melancholy third movement allows for expressive solos, duos and trios, as well as several fountains. The finale proceeds without pause, as the harp introduces a rocking tune that features the interval of a falling fourth.” In the blue glen was commissioned “To honor gentle Kate (1923-2001).”

Davis has enjoyed a successful and widely varied musical career, not only as a seminal and prolific composer of contemporary orchestral and chamber works for the concert stage, but also as a versatile dramatic composer and conductor of film and television music.  His film credits include The Matrix andJurassic Park III. He has received two Emmy Awards and eight nominations for Outstanding Achievement in Music Composition for a Dramatic Television Series.

Born in Rochester, NY, Thomas is the recipient of two McKnight Artist Fellowships and a Citation from the American Academy of Arts and Letters. He studied at Northwestern University, Eastman and the University of Minnesota, where he studied with Dominick Argento. His harp compositions are published by Fatrock Ink and Falls House. The Debussy Trio performed the Canadian premiere of In the blue glen at the 2011 World Harp Congress in Vancouver, BC, and has since then performed the work many times on tour throughout the United States.

Bruce Broughton (b. 1945)
There is Always Something to Do (Morelle)

This piece is Bruce Broughton’s second major commission from The Debussy Trio and is funded by a generous grant from Morelle and Norman Levine of Los Angeles.  The world premiere by The Debussy Triotook place at the 2011 World Harp Congress in Vancouver, BC.  The Trio’srecording of his first, Tyvek Wood, won“best pick” from Gramophone Magazine of London, UK.

Best known for his many film and television scores (Silverado,Tombstone, the theme to JAG), Broughton has garnered 24 Emmy nominations,winning a record 10, an Oscar nomination and a Grammy nomination.

As a concert composer, ensembles such as the ClevelandOrchestra, the Chicago Symphony, the National Symphony and the Los AngelesChamber Orchestra have performed his works.  His Fanfarefor 16 Horns,co-commissioned by the Los Angeles Philharmonic, was recentlypremiered at the Hollywood Bowl.  Hiscompositions for wind ensembles, bands and chamber groups have been performedand recorded throughout the world.  He teaches composition and orchestration at both USC and UCLA.

Three by Three
The Debussy Trio